Disclaimer alert: I like Spanish food – I really do – but it is far from my favorite. Maybe I’ll get a lot of heat for starting off a post like this from Spaniard and non-Spaniard pals alike, but a girl’s gotta keep it real (al pan, pan y al vino, vino).

I love a good tortilla de patata or cocido, but I can only go so long before I start craving something a little more exotic, or God forbid, SPICY. And for the record, black pepper does not count. I have no shame that I spend 8 euros on a small bottle of tabasco at a Taste of America store a few weeks ago and have already used half of it (well, maybe a little bit of shame).

Now that I’ve got that off my chest, there are some Spanish foods that I do absolutely love, especially some of the dishes that are typical to Andalucía.

Another disclaimer: Spanish food is not tacos, burritos, and enchiladas…that would be Mexican cuisine, my dear followers. Here’s what I’ve really been eating in Jaén.

When I was just a little squirt and my parents took me out to eat with them, they’d ask the waiter to a bring a bowl of olives for me to munch on so they could have a few minutes of quiet. I still love olives, so fate would have it that some twenty years later I landed in the world capitol of olive oil. Most bars in Jaén province will give you a tapa of olives with your meal or drink, so I’m always a little saddened when this isn’t a given in surrounding cities.

At home I usually only have the opportunity to eat stuffing on Thanksgiving and Christmas. In Jaén, migas, the andaluz version of stuffing, are abundant. Topped with some type of sausage, such as chorizo, and plenty of garlic, this a carb loving girl’s dream.

To carry on with the carbo-loading trend, I bring you patatas a la pobre, a mixture of pan fried potatoes and onions, often accompanied by green peppers and eggs. It might sound boring, but to me it’s Spanish comfort food at its finest. Pile it on to a few pieces of crusty bread and you’ve got yourself a nice hearty meal. Double the carbs, double the fun.

Move over French fries. This dish of breaded and fried eggplant strips has got you beat. Drizzled with a bit of miel de caña, a sweet sauce similar to molasses, it’s the perfect combination of sweet, salty, and crunchy. In my opinion, the best berenjenas are those cut into thick strips a la steak fries, but they’re pretty dang good any way you slice them.

Sadly, I’ve only been served these once on a day trip to Úbeda, as I think they are particular to that city, but they are SO GOOD. Ochíos are small pieces of crunchy bread seasoned with paprika and olive oil, then topped with morcilla, a type of Spanish blood sausage. As long as I don’t think about what I’m actually eating I can easily down a few of these. 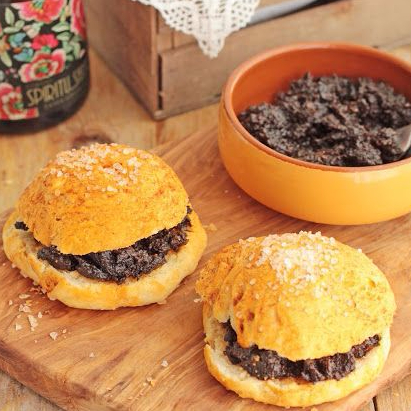 I’m not a huge fan of cold soup trend in Andalusia (sorry, gazpacho), so I wasn’t sure I’d like salmorejo, but trust me, it is de-lish. As a puree of bread, tomato, olive oil, and garlic it might sound a bit like canned baby food, this simple dish originating in Cordóba is absolutely perfect for the hot Andalusian climate.

My list would be incomplete without mentioning at least one desert, and that prize goes to roscos fritos. My discovery of roscos could could not have come at a more opportune time, as I was reaaaaally craving some good old New England style cider donuts when I decided I’d try these out. Pair them with nutella (spread it or eat it straight from the jar, no judgement here) or coat them in sugar for a taste of home that will help you get in touch with your inner basic fall goddess.

PS – Even though I’ve hit the six month mark post graduation, neither my beverage tastes nor my budget have evolved enough for me to recommend any sophisticated beer and wine pairings, but you can never go wrong with a glass of tinto or ice cold caña of Cruzcampo.

Do you have any favorite regional Spanish dishes, restaurant or recipe recommendations, or foodie destinations on the Iberian peninsula? Let’s chat!